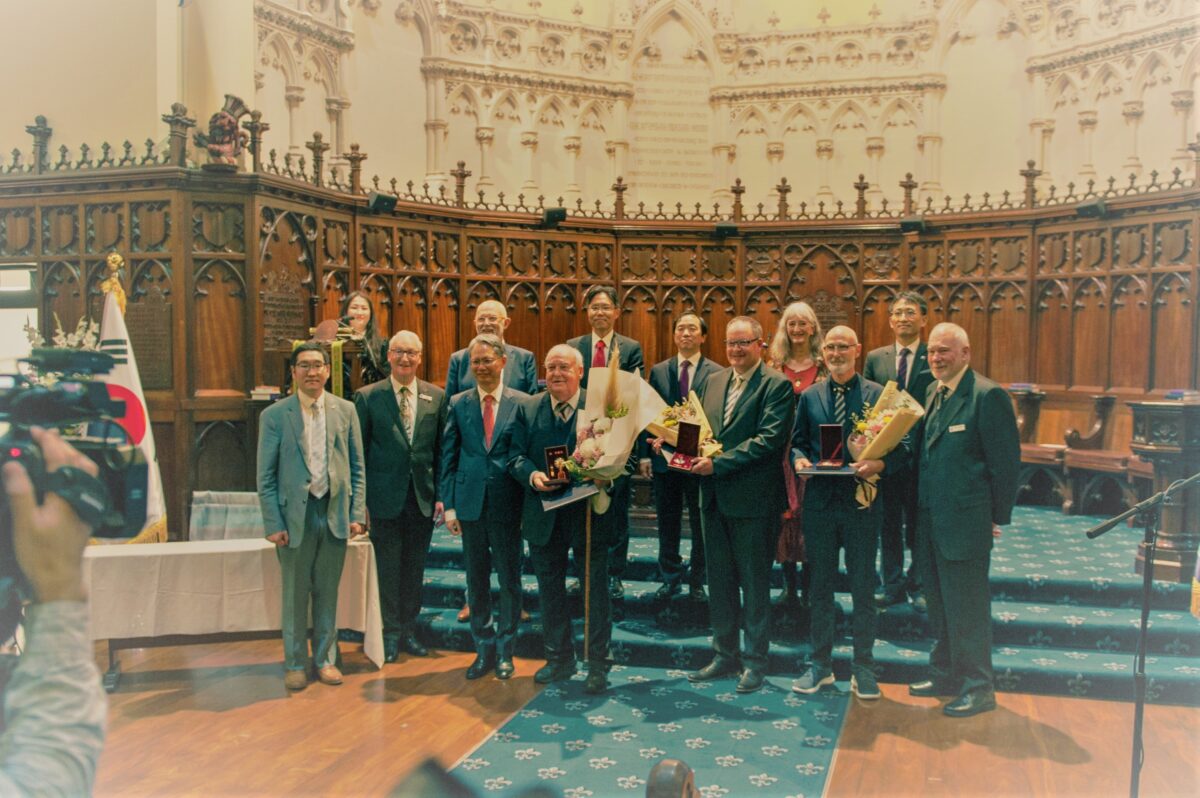 Three Australian missionaries from Victoria have been recognised by the government of the Republic of Korea for their outstanding contributions to independence and national foundation. They are Isabella (Belle) Menzies, founder of the Busanjin Ilsin Girls’ school (now Dongrae Women’s High School), Margaret Davies, then principal of the school and Daisy Hocking, a teacher at the school.

Following the untimely death in 1889 of the Rev Joseph Davies, the first Australian missionary to Korea, the women of the Presbyterian Church of Victoria banded together in 1890 to form the Presbyterian Women’s Missionary Union of Victoria (PWMU). In 1891 the PWMU sent the first of the many missionaries it would send to Korea in the years thereafter – Belle Menzies, Bessie Moore and Agnes Brown. Belle Menzies served in Korea for 33 years from 1891, performing local missions, children’s education, care of orphans, relief work, and more – but perhaps her most significant contribution to Korea and Korean culture was in the realm of women’s education. At that time the education of women in Korea was downplayed or neglected, and Belle, a great believer in the uplifting of women by education, and in education as a means to furthering the gospel of the Lord Jesus, established the Busanjin Ilsin Girls’ School and became its first principal.

In 1910 Japan imposed an annexation treaty on Korea. Japanese colonial rule in Korea was oppressive, including the imposition by force of Shinto worship upon the population, including Christians. This oppression gave rise to many Korean resistance movements which culminated in the nationwide March 1st Movement of 1919. This movement was supported by the students and staff of the Busanjin Ilsin Girls’ School, so Belle Menzies, Margaret Davies and Daisy Hocking were arrested and detained. Belle Menzies was charged with destroying evidence; Margaret Davies was investigated by the police for directing the students during the independence movement, and teacher Daisy Hocking was arrested and prosecuted for violating Japanese colonial security laws after joining the students.

Following a joint investigation by the Korea Women’s Independence Movement Institute and the Gwangbok Society’s Australian Branch and in connection with the marking of the 60th anniversary of normalization of relationships between the Republic of Korea and Australia, in 2021 the government of the Republic of Korea awarded medals to each of these women.

These medals were presented at an official ceremony in Korea on the 1st of March 2022, but due to COVID-19 restrictions no one from Australia could be there to receive the medals. The government of the Republic of Korea therefore invited the PWMU to organise the awards evening on the 3rd of May 2022 at The Scots’ Church, Melbourne for the presentation of the medals to representatives of their families. Given the importance of this matter to the whole Presbyterian Church of Victoria, the PWMU joined with the PCV to hold this function in honour of these missionary ladies.

We had the pleasure of having His Excellency, Mr Jeong-sik Kang, Ambassador of the Republic of Korea who presented the:

We give thanks to God for the faithful service of Belle Menzies, Margaret Davies, Daisy Hocking and the many other faithful missionaries from Australia to the people of Korea, as well as the well-deserved honours bestowed by the government of the Republic of Korea. We also welcome the faithful recording of Belle’s service by Dr Myong Duk Yang and the Busanjin Presbyterian Church, that generations yet to come might be inspired to follow her example in loving and serving the Lord Jesus Christ. We pray that God’s Word and Spirit may continue to shape Korean society; that the Korean church may remain faithful to the Word of God, and that Korea may be united in peace and freedom. As the Lord sent Belle Menzies and her co- workers to Korea with the gospel, so may he send Koreans to other peoples to bless them with the unchanging good news of his love in Christ Jesus.