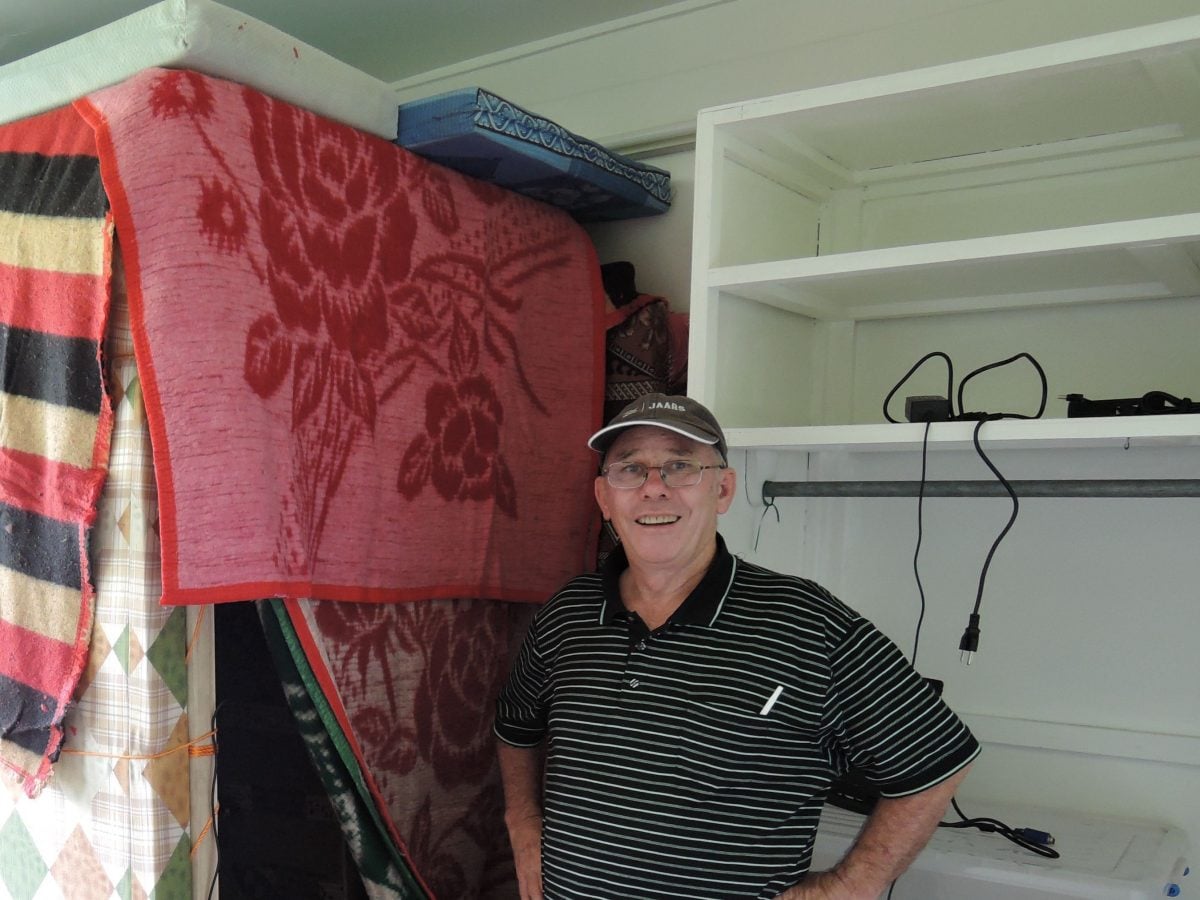 “In his heart a man plans his course, but the LORD determines his steps.”  Proverbs 16:9.

After months of meticulous planning by both Alan and Fay Canavan and my personal office assistant (my wife Susan) the Whites set out for a week of fellowship, cross-cultural ministry exposure, and adventures on the high seas.

The plan was to fly to Townsville, over-night with Alan and Fay and then for Susan to spend the week in Townsville with Fay while Alan and myself continued on to Alotau, New Guinea via Cairns and Port Moresby. This was to be followed by an 8 hour boat trip to Tubetube island where Alan and I were to stay over night and then return to SIL headquarters at Alotau with a team of people from the island who would help Alan with his current language project.

Alan and Fay and family lived on Tubetube for about 30 years while they translated the New Testament, and about one third of the Old Testament, into the Bwana Bwana language of the Tubetube people. The purpose of Alan’s trip was to record the reading of the entire NT in the Bwana Bwana language for inclusion on a mobile phone app soon to be released in the area. The schedule was tight: just six weeks for the entire project.

Well, Proverbs 16:9 kicked in on the second day of the trip, when Fay and Alan were to be found huddled over their computer anxiously scanning reports of a tropical storm (a baby cyclone) forming in the Coral Sea to the east of Tubetube. Would it jeopardise the success of Alan’s mission? Much fervent prayer was poured out to our heavenly Father.

But from there on things just seemed to go more and more pear-shaped. On arrival at Alotau on Saturday morning, Alan was informed that the boat captain had been on holiday and was stranded on the north coast and could not get back in time to sail that day. “Well”, said Alan, “one of my Tubetube readers is already here in Alotau so while we’re waiting for the captain we can do some recording.” But that was not to be. The Bible reader had a pressing family problem that needed to be dealt with and which kept both him and Alan very busy all of Monday and Tuesday  – No boat trip! No Bible recording!

On Tuesday, the captain arrived, but could not sail because the boat had to be serviced before it could sail, and most boats were confined to port because of the high winds and rough seas anyway. He was finally able to sail late Tuesday night but I could not go as there were still grave concerns about the cyclone, and whether or not the boat would be able to sail back in time for me to make my flight. Alan also had to stay behind because the recording was already seriously behind schedule and he could no longer afford the time to sail out to Tubetube. As it happened the return trip was delayed for some hours as the boat had to ride out the peak of the storm in a bay on the leeward side of the island. It was finally able to sail late that evening and the SIL manager was woken by a phone call about 3:00am the next morning to say the boat had arrived safely and could he please go and pick up the weary, storm-tossed islanders.

Meanwhile, a team of recording technicians who had arrived on Saturday, were patiently waiting but not wasting time. Everyone knows that to do recordings one needs a soundproof recording studio – especially when competing with non-stop lawn mowers, barking dogs, croaking toads and loud tropical birds! So our technicians, with the help of the site manager, set about improvising as best they could. Image my surprise as I saw a very large wooden square frame juggled upstairs to one of the dormitories. And even greater surprise as I witnessed a bundle of mattresses follow shortly after. 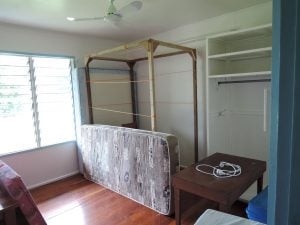 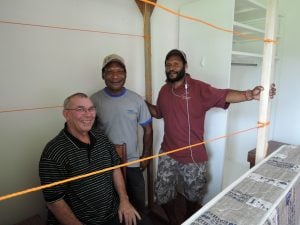 Now what should we do? 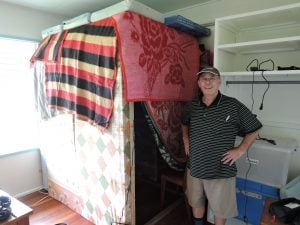 The finished article. Now will it work?

What were they doing? Building a sound-proof recording studio . . . of course! And so, by the time the Bible readers arrived ready to go late Wednesday night, a bed room had been turned into a primitive looking but very effective sound booth. It was small, hot as a sauna, and very dark . . . but it worked and by the time I left to start my journey home mid-morning on Thursday, recording was in full swing and Alan was looking relaxed for the first time that week. 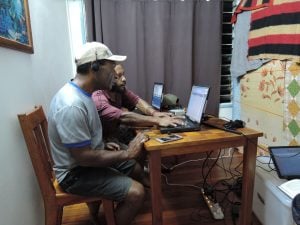 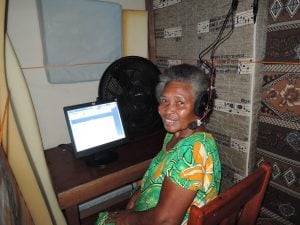 Maria ‘wired for sound’ and hard at work

Things had not gone to plan, but God was in control and Alan was given opportunity after unexpected opportunity to demonstrate the love of Christ in action as he responded to each new situation. God would be glorified through the day to day dealings of His saints with the people around them.

Such is the life of a missionary.

I learnt a lot from this visit and enjoyed talking with the locals, going to a local church (a 3 hour service!), meeting other missionaries and the centre staff, and spending lots of time talking to Alan about the work he is doing.