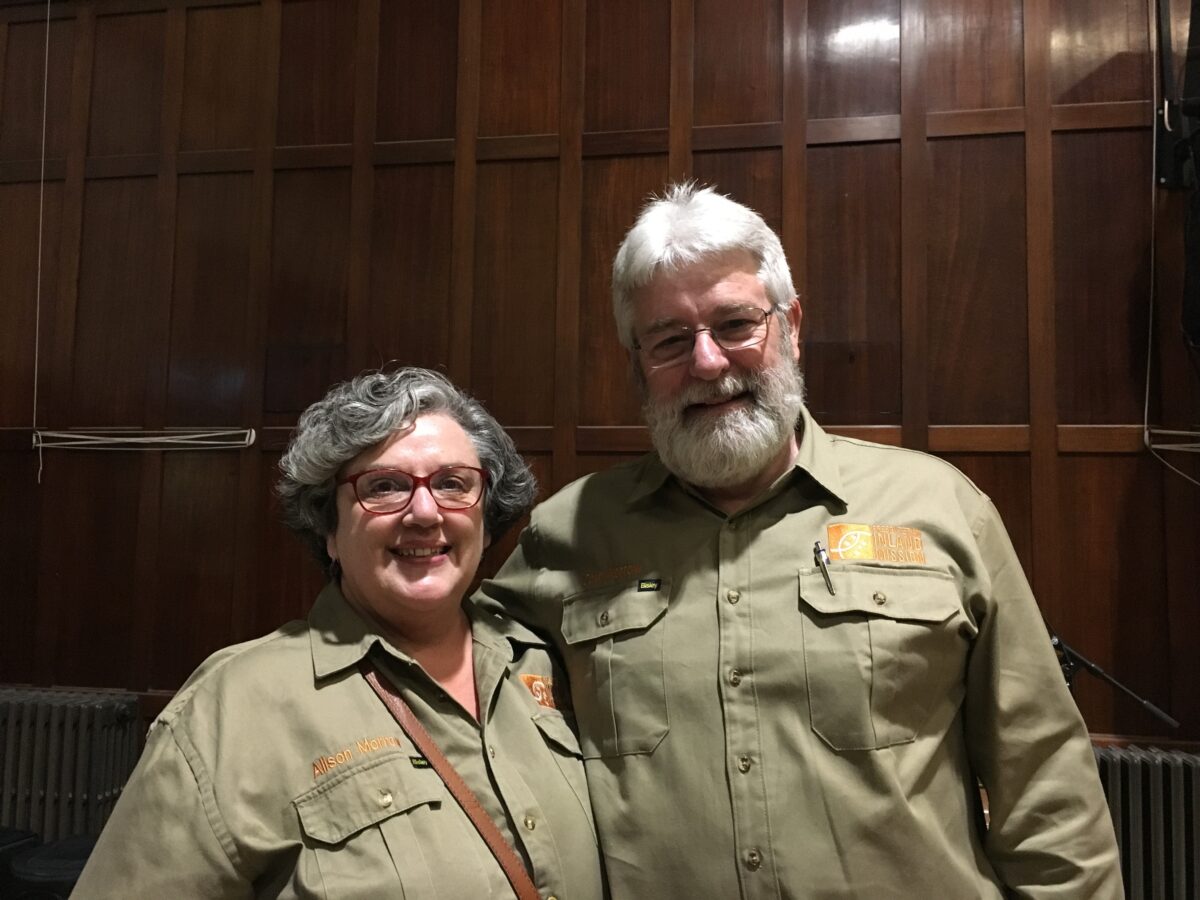 The Assembly had received a report from a young Presbyterian Minister, Rev John Flynn (yes the man on the $20 note!) about the need for the gospel to be taken inland. John Flynn was a man of insight and he inspired the church to undertake this great Mission “beyond the furthest fences” to those in need of Spiritual guidance, pastoral care and who also needed to hear the gospel.

Many men have since served as missionaries, rising to undertake Flynn’s challenge to take the gospel to the outback. More recently there have been husband and wife mission teams like Alison and myself. We figure people on the land are worth driving for but we don’t ride camels like the pioneers did!

In our mission roles, Alison and I undertake what’s called a patrol ministry. We drive to visit people on farms and stations and even serve in small communities. Our patrol is called the “Mungo Patrol” area. It’s named after Lake Mungo, a National Park in the centre of the region.

We love the people we visit. We seek to show them the love of Christ in practical ways yet, also, we share the gospel. Our goal is to make disciples and build up the people we reach so they may be found mature in Christ.

The good news we share is the best news ever and, although we are sinners, we are privileged to be trusted by our Holy God to serve Him and the people we go to in this way.

Tell us about your connection to your Presbyterian ministry in Mildura.

When we applied to join PIM the superintendent at that time, Rev Stuart Bonnington, asked if we would like to serve in Mildura in a part-time PIM capacity with me also serving as a part-time Home Missionary at Sunraysia Presbyterian Church.

We were wrapped! We actually accepted the roles without ever having travelled to Mildura before!

Since we’ve been appointed, almost 6.5 years ago now, we have split our time roughly 50/50 between the two roles. For our PIM work we are supported as normal Missionaries by the wider church but for me as a Home Missionary, congregational giving and support from the PCV’s Ministry Development Committee sustains the work financially.

What does the Moderator of the Presbyterian Church of Victoria actually do?

I could say with tongue in cheek, “As he is told!” but, in reality, I chair the meetings of the General Assembly of Victoria and its Commissions and also undertake the duties I’m assigned or expected to undertake.

This year I’ve been assigned the role of visiting the charges in the Presbytery of Melbourne West. I also visit the church schools: Scotch College, Presbyterian Ladies’ College, St Andrew’s Christian College and Belgrave Heights Christian School. Additionally, I am expected to visit overseas missionaries and this year, before COVID-19 took hold, I was able to visit missionaries in England and France. We were going to go to Hungary as well but the pandemic was just erupting worldwide so we came back to Australia early.

I have also attended various ordinations or inductions of ministers either by being physically present or via Zoom.

However, the bottom line, and the real answer to your question is: The Moderator of the Presbyterian Church in Victoria seeks to serve in leadership and encourage and build up the people within God’s church within Victoria. It’s a great honour and privilege to serve Him and the church in this capacity and I pray that I have done so to His glory.

What were some highlights and some difficult things during your moderatorship?

Frankly, there were many highlights during my year as Moderator but I think the biggest highlight was the night of my induction into the role as my family gathered around and as I was able to issue a call to the wider church by saying “It’s Time to Engage”. It was an opportunity for me to remind the wider church, and our invited guests as well, that it’s time for the church to get out into the community and mix it with the people like never before and share of the hope that is found in Jesus Christ.

In terms of difficulties: I think the pandemic threw a huge spanner into the works! This year was the first time ever that a Commission of the General Assembly was held entirely over the internet. In the end things went really well thanks to the planning undertaken by so many as they worked tirelessly beforehand to make the day work. I can’t thank them and the commissioners who joined in on the day enough. I really believe God was glorified as His church conducted the business He gave them to consider under such challenging circumstances.

Any advice for those who wish to serve in some formal capacity within the PCV?

Pray! Pray! And pray some more! Exercise your God given wisdom. Know the rules under which you operate and seek to work as a team as you do all things to the glory of God!

The interview was originally published in the Spring 2020 edition of “Fellow Workers” , the quarterly magazine of the Presbyterian Church of Victoria.