On Friday, 1st June 2018 the Presbytery of Geelong conducted the Ordination and Induction of Luke McSeveny into the Parish of Geelong West. Because the Congregation lost its suite of buildings in April 2015 by arson with a rebuild in process, the Worship service was conducted in the North Geelong Presbyterian Church premises. It was a wonderful service of worship to God with Luke’s family members, friends and congregational members totalling some 160 people.

Presbyters entered the worship area and the ordination and induction service proceeded. The congregation was welcomed and the North Geelong congregation was thanked for the use of their building and their involvement in the evening. The service was opened in prayer by the Moderator Rev Andrew Bray. Scripture was read by Elder Drew Chittenden, Session Clerk; Lk.17: 1-10 and Rev Darren Middleton preached the sermon, “Unworthy.”

The Narrative of Steps was read by the Clerk. The Moderator put questions to the Geelong West congregation to which they signified their support to Luke to the congregation for its information and Luke McSeveny then signed the formula.

Presbytery Laying on of hands 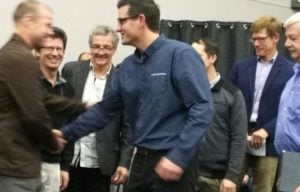 The worship closed with the benediction followed by supper where those present congratulated Luke and enjoyed good fellowship. During supper, Luke, Jo and the family came forward, when a beautiful flower arrangement was presented to Luke’s wife, and a congregational member, Mrs Karen Sheehan presented Luke with a beautiful book compiled from individual and personal greetings of the congregational members. A fitting and lasting memento for Luke to celebrate the significant occasion.